Trude is our beautiful Ster mare. She is 11 years old and throws the most stunning foals. She has had her first ster filly, who was reserve champion three year old at the central mare show in holland in 2015, gaining first premie ster PROVISIONAL KROON at only 3 years old! That filly is by Thorben 466 Double Sport predicate. Trude has had another Thorben filly, Tessa, who was sold to Alex Boldry to become her next dressage star. She will be three in 2017 and we look forward to seeing how she grades! Trude has a second ster filly by Alke, and we are excited to see how her younger offspring do at their respective gradings. 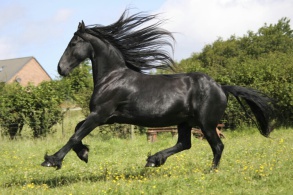 Trude had a Thorben colt in 2017, and is currenty in Holland with the stallion for her 2019 foal.

Trude is tested negative for Hydrocephalis, Dwarfism and the red gene. 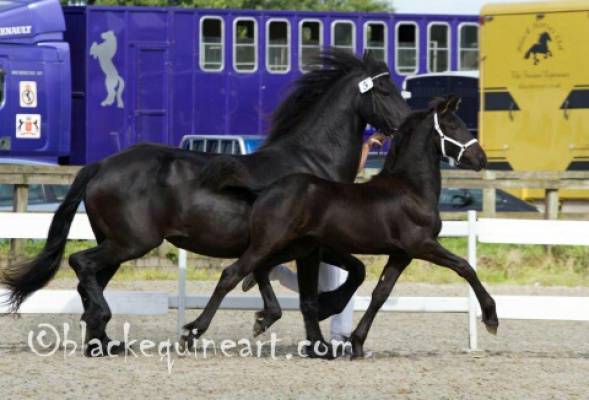 Jade is our very special FIRST PREMIE STER mare, she was born 2011 had for first foal Annalise in 2016 with us. Our aim, as with Trude, is to breed the best foals we possibly can to get our mares to preferent status. Jade is by Stendert 447 SPORT. The lineage on Stendert's dam's side is extremely strong and he has arguably one of the best pedigrees of the studbook. Stendert shows scope, regularity and elasticity in all three paces, with the hind leg placed nicely underneath his body. He presents a super outline in walk, trot as well as canter and uses his back in an exemplary fashion.

She is negative for hydrocephalis and dwarfism.

Jade has been an excellent mother and has done her filly very well. The filly Annalise fan Fraithwen is by CURRENT WORLD CHAMPION stallion TSJALLE 454 SPORT. His list of achievements to date include;

Jade foaled a stunning colt Eelke, also by Tsjalle on 2ND January 2017. He is being retained by us certainly for the medium term.